skip to main | skip to sidebar

Thank you for visiting our blog. We want this to be a rich and informative discussion forum and look forward to your participation. You can visit our website at www.prolifecampaign.ie or email us on info@prolifecampaign.ie 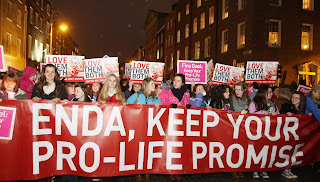 The Unite for Life Vigil outside the Dáil in freezing, windy, rainy midwinter darkness on Tuesday evening had several political messages, messages so strong that the thousands who packed Molesworth Street and Kildare Street outside the Dáil left with hearts warmer than when they’d arrived, and sending a chill through the hearts of watching it from inside the Dáil.

First, it was what it said on the can – a formal collaboration among all the pro-life groups – who at something under a week’s notice organised it. The political message of this is that the Government and the political parties have awakened a sense of urgency among the pro-life majority that has washed away past differences on tactics and brought to birth in their place a strong unity on strategy.

Second, when you consider the short space of time there was to get the word out, and for people who wanted to come to make the practical arrangements so they could come, the fact that the streets were crowded shows the passion, the seriousness of intent, the commitment that drove so many people to make sure they were there. That pro-life political commitment is now trained on each politician who votes to bring in abortion. Pro-life electors have elephantine memories. Politicians considering voting for abortion in the Oireachtas saw that their votes in there are going to cost them votes back home in the own constituency. The vote-cost of support for abortion in Leinster House just went up.

Third, like an icon made radiant by goldleaf, the vigil was rendered radiant by the extraordinary experiences shared by the two young mothers, Cliona and Liz, who spoke about their children. Cliona spoke about John Paul and how his short life had enriched the life of her family – he had anencephaly. And Liz spoke about the how her son John, born with no limbs, had enriched the life of her family. The warmth of these mothers speaking about their children and the love they brought into their lives was the heart of the Vigil. The only shadow was the willingness of some doctors to help them have their babies aborted.

View our resources on Scribd